The cross in my design

Architect Franco Stella about the competition and the cross on the palace cupola.

The cross in my design

The competition brief initially only extended to the reconstruction of the cupola volume. The historically accurate reconstruction of the facade was an option, but not a mandatory specification. The various competition submissions from 2008 featured either a modern cupola without a cross or the historically accurately reconstructed cupola with a cross – mine was one of these. Almost ten years had passed since the competition win, and the basic structure of the cupola had already been completed when the first objections against a return of the cross to its original place became public.

The cross on the palace cupola

Maybe the debate about the cupola would not even have sprung up if the building had not been a reconstruction but a historical original, because in a democratic and pluralist society, the removal of a symbolic marker from a religious building – whether a cross from a church, a crescent from a mosque or the Star of David from a synagogue – would always be perceived as a dishonourable act.

An act which, in my opinion, would also not be justified by a change of use – for example the conversion of a church into an exhibition space.
In the history of church architecture, the cupola and the cross always feature as a unit; a cupola without a cross would no longer indicate a church but only a temple, which is the case on the early Roman Pantheon, for example, or a secular building, whose first, very famous example is Palladio’s Villa “La Rotonda”. I think losing the cross would be associated with a loss of understanding with regard to the original use and historical importance of the cupola. Without the cross, the cupola might even tell us a falsehood about its history. And the inscription on the cupola increases our knowledge of the formal governance relationship the Prussian kings had with Christianity.
I have already countered the repeatedly offered objection that the original construction of the cupola and cross should be interpreted as a “reactionary signal” in the sense of a royal thanksgiving for the God-led crushing of the 1848 revolution elsewhere.

The palace cupola should not join the ranks of the rich tradition of churches that were built to thank God for the end of a life-threatening danger, in particular the plague outbreaks in the 16th and 17th century. Even Eosander’s design plan already featured a cupola topped by a cross, just like Stüler’s design one-and-a-half centuries later. Its construction was almost completed by the time the 1848 revolutions started, as illustrated by a surviving contemporary painting.
Generally speaking, it seems to me as if those who oppose the return of the cross would only accept a reconstruction that matches the political and architectural ideals of our times.
On the other end of the scale, in a difficult to reconcile relationship, is the idea of reconstructing architecture that represents learning about and remembering history “as it was”, and not how we would like it to have been today. 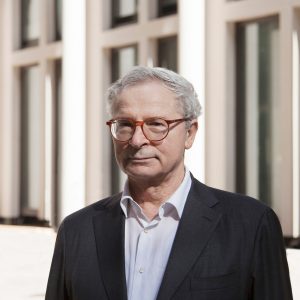 The architect Prof. Franco Stella won the 2008 competition for the reconstruction of the Humboldt Forum in the Berlin Palace. Since 1990 he has been teaching at the University of Genoa. He also runs an architectural office in Vicenza.