This article is part of the feature „The Berlin Palace 2.0. Concrete and Baroque“

The scaffolding has been removed from the Palace’s new old facades on the Lustgarten to reveal a gleaming “quince yellow”. Perhaps an appropriate term for the colour, because how many of us can honestly remember what a quince looks (or tastes) like?

Any more than we know what the Berlin Palace looked like 300 years ago. Deciding which shade to use for the plasterwork of the reconstructed facades of the Berlin Palace therefore required some detective work. Historical depictions showing the colour of the profane baroque masterpiece built by architect Andreas Schlüter for Frederick I, king “in” Prussia around 1700, are rather hard to come by.

What we do know, of course, is that the first Prussian royal residence in Berlin was modelled on the palaces of the French Sun King Louis XIV in Versailles, allowing us to draw some conclusions about the colour. But none of this constitutes reliable information. The plaster on both the baroque Armory opposite and the rococo Knobelsdorff palace in Potsdam, for instance, is painted pink. So how to resolve this difficult question with any certainty?

The decorative details and colours of the Berlin Palace were not reasonably accurately depicted until the early 19th century on the paintings by Biedermeier painter Eduard Gärtner, who created various city panoramas that also feature the palace. He painted a famous picture of the Schlüterhof. However, at that time, the baroque palace was already more than 100 years old. Johann David Schleuen’s etchings, for example, are older, as they date from around 1750, but they are not in colour. The original construction plans have not survived. So, what methods can be used to learn what the original colour was 300 years ago?

The pale yellow silicate used to paint the new facades was based on the colour of a single original fragment of plaster found in Charlottenburg Palace, which restorers dated to around 1820. The choice of colour for the reconstructed Palace facade thus accords with the non-painted sandstone used in the architecture of the same period. In other words, the natural stone elements on the facades were left unpainted, as was customary in the baroque era.

But there are several more details that have only recently been added to the façade, contributing to its overall authenticity. A number of the statues of the Goddess of Fame (Fama) in the larger sculptural ensembles, above certain gates for example, are now playing metal trombones and trumpets. The gilding is almost finished. The only things missing are the balcony parapets in the Schlüterhof Courtyard like the one above the Lustgarten Gate V. The grand cartouche under the rotunda of the dome on the west façade and the dome’s copper cladding are also yet to be added. In the final step, the dome will be crowned by a so-called lantern, which in turn will be surmounted by a four-metre-high cross as the finishing touch.

This cross is part of the original plans for the reconstruction of the facade proposed by the architect for the competition in 2008. In its time, the cross on the dome – itself not built until the mid-nineteenth century – was intended to signal the presence of the new palace chapel beneath it. As we know, Frederick William IV had Schinkel convert the old “Erasmus” palace chapel in the south-eastern corner of the building into his private apartments and offices. Naturally, the cross also symbolized Prussia’s links with Protestantism. As a restored element on top of the Humboldt Forum the cross can be regarded today as standing for western values. 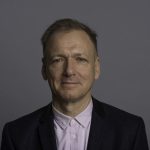 Bernhard Wolter studied German language and literature, political science and architecture and has been a member of the Humboldt Forum Foundation at the Berlin Palace since 2009. He is head of the Press and Public Relations Office.