Esther Hirsch, theological consultant at House of One, writes about symbols for our global times. Currently under construction close to the Humboldt Forum, the House of One is a centre for three monotheistic religions. We are only too aware that religious symbols can be limiting, and it is precisely for that reason that we are looking for a new approach to old symbols.

Star of David, Cross, Crescent: everyone associates each of these three symbols with something. But each of us makes a different association. These symbols supposedly reduce the monotheistic religions to a common denominator. But this is an impossible undertaking, since even communities within a single faith do not agree amongst themselves.

In fact, these symbols were not even originally religious. A star made up of two interlocking triangles was utilized by many cultures over the course of the centuries before being abused by the National Socialists for their own purposes and later being placed on the flag of Israel – although not without sparking controversy, incidentally. From a religious viewpoint, the menorah is a symbol with a much clearer association with Judaism. The crescent was spread most notably by the flag of the Ottoman Empire – a Sunni-led state. In Islamic iconography however, the dominant form is calligraphy.

It is the alliances forged between those in power and their respective religions that spread these symbols. Though the fish served as a secret identification mark among Christians, the cross stood for the theological content of their religion. A practising Christian might associate it with charity and humility, with the suffering and death of Jesus Christ; for many non-Christians, it symbolises the suffering meted out in the name – or under the auspices – of the church. But it is not only the personal association that we immediately make – the spatial one is just as significant. In a synagogue, the Star of David is associated with Jewish history; in the secular context it generally represents the state of Israel. We draw conclusions about a symbol’s meaning from its context. Religious symbols set a tone. They awaken an idea of what or who is there, of who is welcome. Those who are prepared to widen their horizons, those who want to enter into an equal and respectful dialogue with others, must – in the words of Navid Kermani – make space for the other person’s truth.

The House of One is just such a space. It creates opportunities for informal encounters and offers areas of retreat. The design includes a meeting space which connects the other areas, and is free of any religious connotations or symbolism. Similarly, the external appearance of the building seeks to have no influence on the values of the person approaching. It is public spaces – squares and buildings – which offer us opportunities accessible to everyone without question, where all can be sure of their equal status. Urban architecture shapes our thoughts and actions and sends signals to the outside world. It sets the visible foundation of democracy. Who are ‘we’ or ‘they’? This is not a question a public, democratic space should engage with. If a building’s purpose is to serve society as a whole, it needs openness, even in its appearance, and religious symbols are a contradiction to this. The House of One is dedicated to religion, but that is not an end in itself. It seeks dialogue, or more precisely: exchange. The other person’s truth. We ourselves determine the ‘we’ by which we define ourselves. We are a pluralist society, and that is much more exciting than uniformity. But only those who engage with others can get to know them – and also be understood by them. Symbols are created by the group, and signify our membership. Everyone knows whether or not they belong. If I put several different symbols together, at best I would have enlarged my group, but it would still not be an invitation to everyone regardless of their affiliation. Symbols constrain us. The House of One is a sacred building. An opportunity to get to know the perspectives of differing world views, and to be better understood in your own. And precisely for that reason it refrains from using symbols with religious connotations.

With their curiosity and thirst for knowledge, people like Humboldt show us the way by observing, considering and gathering new insights – never ceasing to broaden their own horizons nor falling back on pre-existing patterns of thinking. Since we are children of globalisation, believing we are familiar with every corner of the globe, we can once again devote ourselves to our immediate surroundings. We will probably find the unknown right here: the people we live with. They do not simply belong to the symbols we assign them: Star of David, Cross or Crescent. There is an incredibly wide and beautiful diversity within religions. Every year we begin reading the Torah afresh, and will never cease to discover something new for our lives. Anyone firmly rooted in their own tradition has the capacity to find an empathetic connection with the world of others. They will find the things that unite as well as those that divide. We need both. In a shared building on Petriplatz, every room will be filled with light coming – symbolically – from above. But here below, we are the ones who ultimately fill the space with life. 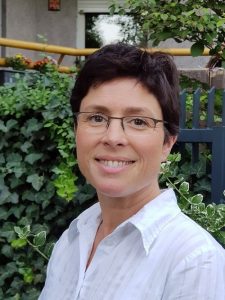 Esther Hirsch was born in Berlin in 1970. She is one of three theological consultants at the House of One, and cantor at the Sukkat Schalom synagogue.