A monarchy under the cross

At the time of Louis XIV, there was lively debate among the courtiers in Versailles as to whom to bend the knee first when entering the court chapel: to the altar or to His Sacred Majesty. A judgement of Solomon was settled upon: The courtiers and their ladies were to kneel before the king, who in turn would kneel at the altar, transferring the gesture of reverence to God.

In 19th century Prussia, priorities were more clearly defined. A dome like construction on King Friedrich Wilhelm IV’s court chapel, built between 1845 and 1854, above the west portal of the Berlin Palace, had an inscription emblazoned on it stating that every knee should bow before Jesus, because in Him alone is salvation. Taking this statement to its logical conclusion, Prussian subjects were not to kneel before the king, but together with the king before God. No ruler and no state may appoint itself as a bringer of salvation or consider itself the centre of the world.

In his declaration that no man should bow the knee before another and that salvation lay in God alone, Friedrich Wilhelm distanced himself both from potentates such as Louis XIV, who allowed themselves to be celebrated as mediators between God and man, and from tyrants and autocrats such as Robespierre and Napoleon, the first in a long line of self-appointed political messiahs who were prepared to sacrifice hundreds of thousands of lives for their plans for world redemption. Friedrich Wilhelm himself was profoundly convinced that his office was merely a mandate that God had ‘conferred’ on him in the same way as a liege lord conferred a fief on a vassal and for which he must render particular account. This idea also found expression in the apse mosaic in the Charlottenburg Mausoleum. It immortalises his parents in its depiction of them returning the royal crowns entrusted to them to Christ after their death.

With this interpretation of his office, Friedrich Wilhelm was setting himself apart even from the absolutism of his own ancestors. It is well known that Prussia’s first king Friedrich I commissioned Johann Friedrich von Eosander to construct the western main portal as a Roman triumphal arch as part of the conversion of the Berlin Palace, in order to position himself in the tradition of the ancient emperors. After his death in 1713, Eosander sought the favour of his successor, Friedrich Wilhelm I, known as the ‘Soldier King’.

Farewell to the Temple of Fame

In a presentation sketch put before the new king, he amplified the triumphal portal’s imperial tone by adding a two-storey domed tower which, had it been realised, would have reached a height of almost 80 metres. For its upper floor, Eosander envisaged a monopteros, following the baroque style of a temple of fame. He fashioned the lantern above the dome from female herm pilasters, on which rested a huge crown. The pinnacle was to be a weather vane depicting a naked Venus, progenitrix of the Caesars, surrounded by a glorious halo of rays.

In essence, the design suggested that, like the Roman emperors, the House of Hohenzollern had merited eternal fame and an entitlement to imperial greatness; both seemed to have been granted from heaven in the creation of the Prussian monarchy in 1701. However, Eosander had thoroughly miscalculated. Unlike his father, the Soldier King was not interested in monarchical representation. The ambitious plans fell victim to economy measures, and Eosander pre-empted a dismissal with his resignation.

The dome project was not revisited until Karl Friedrich Schinkel converted the Palace’s medieval Erasmus Chapel to residential use. Now there was a practical reason for building a dome: to create the space for a new chapel. Of all the variants considered, this solution was the most economic – and the most symbolic. The court chapel became the most prominent room, unlike in Versailles, where the bedroom of the Sun King formed the centre of the palace complex.

No sooner had Friedrich Wilhelm ascended the throne in 1840 than he created his own design drawings, initially considering transferring Eosander’s two-storey dome tower into the stylistic idiom of antiquity, albeit in reduced size (this also indicates that Eosander’s presentation design was still known in the mid-19th century). However, the result proved unsatisfactory due to its segmentation.

The design drafted in 1845 by Friedrich August Stüler was considerably better proportioned. Stüler had also designed the dome as the explicit antithesis to Eosander’s temple of fame. Instead of exclusively serving the king’s prestige, its primary purpose was to honour God and meet the religious needs of the people. In place of a forest of columns, a simple octagon of pillars was constructed. The lantern no longer consisted of female herms – now it was made up of cherubs. The crown was exchanged for palm branches, symbols of heavenly peace and eternal life, while Venus had to give way to the cross. Finally, the statues of the gods which populated the base of Eosander’s dome were supplanted by eight Old Testament prophets. According to the biblical narratives, these were men who generally opposed the kings of their time, especially when the kings did not obey God’s commands. We can conclude that on Stüler’s dome they signified not only heralds of Christ, but also moral guardians and admonishers, even as supervisors of the monarchy’s reign.

Of course, the new dome also represented a separation from the ideas of freedom spread by the Enlightenment and the democratic revolution of 1848. Since Friedrich Wilhelm felt obliged to carry the burden of the crown imposed on him by God until his death, he could neither give it away nor diminish its rights under a constitutional amendment. Either would have been an inappropriate act of self-empowerment in his eyes. Nor was it possible for him to accept a crown from the hand of a human being, which explains why he declined the German imperial title which the Frankfurt National Assembly granted him in 1849.

Within this logic, Friedrich Wilhelm’s idea of rule was total, but not totalitarian. Total, because it placed the king entirely under the rule of a higher power; virtually anti-totalitarian in that it eliminated any form of autocracy or Caesarism. The cross and inscription should be viewed in this context. The worship of Jesus by all living creatures takes as its biblical foundation the absolute gift of self on the cross and absolute obedience to God. Friedrich Wilhelm regarded precisely this gift of self and this obedience as an obligation.

In view of this art-historical context, the recently-expressed fears that the cross and inscription propagate a reactionary political attitude and religious intolerance that are inappropriate within a democratic, cosmopolitan society prove to be sweeping generalisations which conceal the layers of meaning outlined above. Our concern, however, should be to make as many layers of meaning as possible visible in order to arrive at a view of the bigger picture that transcends epochs and cultures, which the Swiss art historian Jacob Burckhardt described in his ‘Reflections on History’ as the image of a ‘great ethnographic map of the mind’. The purpose of such a map, which does justice to ‘all races, peoples, customs and religions in their interconnectedness’, is to break out of imprisonment in one’s own epoch and ‘cultural shell’, and to recognise an understanding of change and diversity as the ‘greatest spiritual possession’.

With the Eosander portal, Friedrich Wilhelm IV demonstrated how change and diversity can be accomplished appropriately. In adding the dome, he achieved not an iconographic cleansing, but a critical annotation, initiating a dialogue with which we can engage – provided we do not interpret dialogue as a conversation of like-minded people, but rather let the past have its say in its own language. 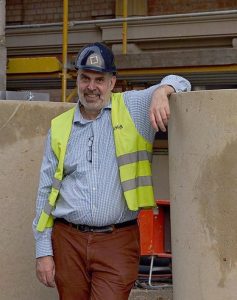 Peter Stephan is Professor of Architectural Theory and history of Art at the University of Applied Sciences, Potsdam.